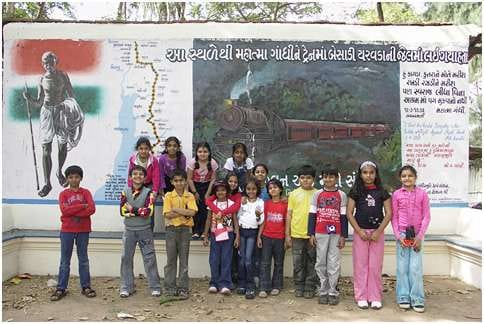 “Every child of the age of six to fourteen years shall have a right to free and compulsory education in a neighborhood school till the completion of his or her elementary education. [N]o child shall be liable to pay any kind of fee or charges or expenses which may prevent him or her from pursuing and completing the elementary education….”

In 2009, the Parliament of India enacted The Right of Children to Free and Compulsory Education Act or Right to Education Act (RTE Act), which codified the fundamental right of free and compulsory education for children between the ages of six and fourteen. Leading up to the Act, India had been making major strides in reducing the number of out of school children – from 25 million in 2003 down to 8.1 million in 2009, according to the World Bank. Building upon this progress, the act included provisions to address access, equity, quality, and retention.

That’s where researchers at the Right to Education Resource Centre (RTERC) of Indian Institute of Management, Ahmedabad (IIMA) come in. RTERC has been studying the implementation of the RTE Act in Indian states, with a special focus on Section 12(1)(c), which mandates that a minimum of 25% of seats in private primary schools be reserved for children from disadvantaged economic backgrounds. Right now, they are working in collaboration with Central Square Foundation (and using SurveyCTO!) to follow up with 2000 children who were part of an earlier study on the impact of different information campaigns on enrolling eligible students in private schools.

“The broad idea is to understand the implementation of the mandate across Indian states and how are they performing,” said Akshay Milap (Doctoral Student, IIMA). “We have chosen Ahmedabad initially due to our familiarity with the setup here. Also, most of the learnings for running the project would happen initially – putting the tools in place, laying the base, identifying the problems faced by parents or children and the logistics needed. Going further, we are thinking about doing a comparative study across the Indian states.”

Piloting, testing, and training are essential parts of any research project, but they are especially important when transitioning from paper to digital data collection. The extra effort was worth it for the research team, who were able to meet their data quality and security requirements while implementing a number of features, including relevance, skip patterns, constraints, GPS capture, photos, randomization, and offline data collection.

Karan Singhal (Research Associate, RTERC) reflected, “Audio audits were one particular feature of SurveyCTO that we were quite keen on using. Our initial plan was to substitute audio audits for physical back checks. There were 40 enumerators doing the survey of 2000 respondents. So, in some cases where we weren’t even sure if the survey happened or not, the audio audits were really useful.”

Nisha Vernekar and Ishu Gupta (Research Associates, RTERC) added, “Overall when it came to design and the functionality, we were satisfied with SurveyCTO. It’s easy to create your forms in excel and then upload it as a form on SurveyCTO. It’s user-friendly.”

Next up for the team: analyzing their data and looking for opportunities to apply their findings in Gujarat and beyond.

Image: “frontier mail, navsari“ by nevil zaveri is licensed under CC BY 2.0

What’s the impact of organized crime on government efforts to fight COVID-19 in Colombia?

5 ways to get the data you need with skip logic

Name it like you mean it: Variable names for well-designed survey research