SurveyCTO is a very different platform from when we first launched it three years ago. We’ve added hundreds of new improvements and features – some subtle, like form version control, and some more obvious, like Google integration or datasets. However, the server UI has stayed largely the same. It’s starting to feel complicated and out-of-date; and our users have grown in their use of SurveyCTO and in their ambitions for electronic data collection. It’s time for a change. It’s time for SurveyCTO 2.0. 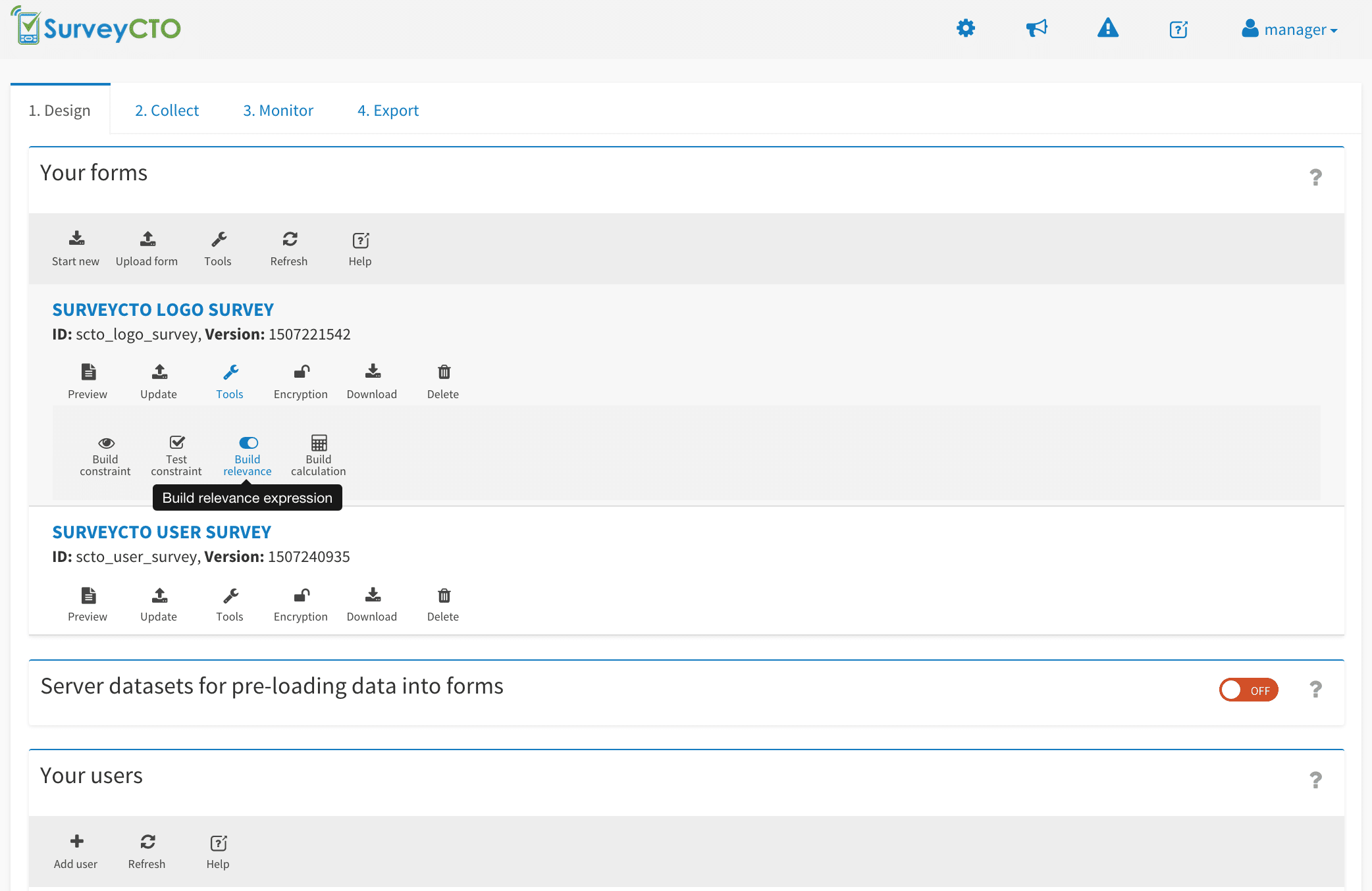 SurveyCTO 2.0 isn’t quite ready for prime time yet. But we wanted to show you a preview so that you know that we are working on some exciting changes that will improve your experience with the platform. 2.0 will be more streamlined, easier to use, and easier to navigate. And it will open up some new possibilities for centralized, multi-faceted data collection.

Want to test a form and see what it will look like on your device? Just hit the “Preview” button to open it instantly in your browser.

That’s right: 2.0 will also have web forms that replicate the Android app, so no more downloading your form to an Android device every time you want to test it! You can even change the web form appearance to see what the form will look like on devices with different screen sizes:

Want to use case management? No need to fiddle around with the datasets tab. Just hit the toggle to turn on case management! And even edit cases right there on your server:

Want to publish form data to Google Sheets or Fusion Tables? Again, no need to go through datasets anymore. Just publish the form directly to Google:

2.0 has more to offer than just the UI changes. Another major addition is that we will finally be rolling out SurveyCTO’s very own web forms. These aren’t your little SurveyMonkey-type forms. No. SurveyCTO Collect will be as powerful and as flexible on the web as it is on Android, allowing you to create and deploy your most complex surveys on the web. Create rosters, advanced validation, and skip logic, pre-load data, assign cases, insert and capture media, capture text audits, require logins. Just about anything you can do on Android, you will also be able to do on the web. In any modern browser, on any platform.

In fact, SurveyCTO Collect 2.0 shares most of the same back-end code for both Android and web interfaces, so you can be assured that forms will work the same on either platform. You can create a single form in Excel and deploy it either on your device or as a web form, or both. Submissions uploaded via either platform will be automatically merged under the same form on the server.

Want to see a working, interactive preview of the form? Check it out by filling out our user survey here:

And see the form definition for this survey if you want to see how it was designed behind the scenes. It’s just an ordinary SurveyCTO form definition, but we do use a few tricks to show different opening and closing screens for web vs. Android users, and to preload information about existing users using passed-in case ID’s (which were in unique links that were emailed to all of our existing users). We’ve added comments into the Excel sheet so that you can follow what we did.

We’re rushing to get everything done, tested, and into your hands ASAP – but we pride ourselves in offering the most stable platform out there and stability takes time. So we aren’t rushing too much as we work our way through the hundreds of revised features and the thousands of test cases.