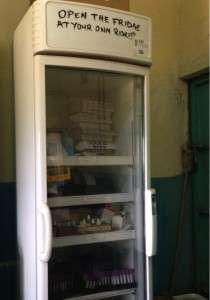 Let’s start things off with a quiz:

1. What percentage of health facilities in Kenya comply with minimum patient safety standards as per current regulation?
A. 20%
B. 3%
C. 65%
D. 90%

B. We do not have data for the entire country, but based on baseline data collection in all facilities in the Kenyan counties of Kakamega, Kilifi, and Meru (~1,100 health facilities), 3% of facilities comply with minimum patient safety standards.

C. Based on the same baseline (~19,000 observations of healthcare-worker-patient interactions), 100% of procedures were conducted with new syringes and needles in the three study counties.

This baseline research comes out of the The Kenya Patient Safety Impact Evaluation (KePSIE), a unique partnership between the Kenyan Government and the World Bank Group (WBG). It is the largest trial to date aimed at improving patient safety in low- and middle-income countries.

We wanted to learn more about KePSIE and how SurveyCTO is playing a role in the research, so we reached out to Guadalupe Bedoya, an economist in the Development Impact Evaluation team at the World Bank’s Research Group and the Team Leader and co-principal investigator of the impact evaluation. She provided an in-depth look at how the project has evolved, what her team has accomplished so far, and where the research is headed next.

Tell us a little about the project.

In early 2010, as a product of a multi-stakeholder dialogue, supported by the World Bank Group through the Health in Africa Initiative, public, private, and civil society stakeholders in the health sector agreed to partner to develop a health inspections regime that would be fair, transparent, and focus on guaranteeing the safety of all Kenyans.

“The scale and scope of this survey make it the world’s biggest patient safety survey conducted so far.”

Since then, all of the professional boards and councils in Kenya with a legal authority to inspect health facilities agreed to conduct joint inspections based on an agreed set of minimum mandatory patient safety standards. The following challenges related to health facility inspection were identified by the KePSIE team and stakeholders when the team joined this effort nearly one year after the first joint inspection checklist was gazetted:

“…we programmed our inspection checklist in SurveyCTO, which enables our inspectors to use SurveyCTO’s interactive interface to inspect health facilities.”

After several years of work, we have accomplished two of KePSIE’s objectives, reflected in:

What are your next steps?

The team is currently in training and preparing for implementation. 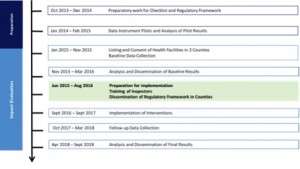 The implementation of pilots to assess the impact of inspection regimes on patient safety is planned to start in September 2016. Specifically, we will experimentally allocate the census of nearly 1,100 private and public health facilities (around 10% nationally) in three Kenyan counties – Kakamega, Kilifi, and Meru – into one of three randomly allocated intervention arms:

The three counties where the study will take place were selected by the Health Management Representatives of the 47 counties in the country to represent different conditions and markets in Kenya and the details of the implementation are being developed with the regulatory boards, the Ministry of Health, and the pilot counties.

KePSIE will deploy 12 full-time inspectors to conduct inspections in public and private facilities, applying warnings and sanctions as per the March 2016 Gazette of the Joint Health Inspections Checklist. This team will be also in charge of implementing all the features of the KePSIE pilots, following strict protocols that will allow us to understand the potential of different inspection models and implementation to improve patient safety.

What are some of the innovative ways you are using SurveyCTO?

We used SurveyCTO to collect our baseline data. But it is proving to be an equally useful tool during our implementation phase. For example, we programmed our inspection checklist in SurveyCTO, which enables our inspectors to use SurveyCTO’s interactive interface to inspect health facilities.

But first we had to standardize the health inspection checklist considerably. We programmed the first version using SurveyCTO in 2014 and then we piloted a version that the regulatory boards wanted to test. When they saw the quantitative results for the first time (never before had they seen quantitative results of the health facility performance on patient safety), they decided to implement and gazette the detailed format version we had programmed in SurveyCTO.

“When we showed the electronic version of the checklist to real inspectors for the first time, they were amazed that their job could be so much easier and that they could easily access the data as well.”

Both for the pilot and the baseline data collection, we collected a survey version of this checklist.

Now we are supporting the training of inspectors to do official inspections with SurveyCTO. Because of the slightly different purpose of using SurveyCTO for government officials during health facility inspections (versus collecting household survey data), we tailored SurveyCTO’s different features to fit our project. Here are a few examples:

When we showed the electronic version of the checklist to real inspectors for the first time, they were amazed that their job could be so much easier and that they could easily access the data as well. They are mostly senior government officials that do intensive but sporadic inspections (10-day waves) but have other responsibilities in the Ministry of Health or the medical boards. Now they are training full-time inspectors to do intensive inspections during our project. The combination of the electronic version of the checklist (through SurveyCTO) plus the web-monitoring system are an important part of the accountability systems we are testing.

SurveyCTO is a research tool for us as researchers to adjust the tools as we go. At this stage, we will also be fine-tuning and testing how to implement this at scale (a World Bank project is already thinking of scaling-up part of what we are doing). It would be interesting to assess whether you can design a tool that goes beyond research.

Save the date! Join us at HumTech2016

Join SurveyCTO at the ICT4Eval International Conference in Rome