In this blog post, we reference the Android app for SurveyCTO Collect. Beginning September 10, 2019, SurveyCTO version 2.60 introduced an iOS app for Survey Collect, allowing users to test forms on any device of their choice. We also replaced SurveyCTO Sync with SurveyCTO Desktop, the safest and most powerful way to centralize your work, export your data, manage projects, and work offline. 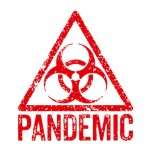 At Harvard’s John F. Kennedy School of Government, there is a long tradition of using “simulation” to give students a more realistic feel for the practice of negotiation, policy analysis, and other real-world skills. In recent years, Christopher Robichaud, a lecturer in ethics and public policy, has championed its use across the Masters in Public Policy curriculum. As part experiment and part demonstration a few years ago, he, Dan Levy, and I developed a simulation for use in a required course on policy analysis. In it, students were faced with a possible pandemic and asked to advise their president on several key decisions. The simulation worked well in a class setting, but there was never quite enough time for a thorough debrief and discussion.

So this year, Dan came and asked me how hard it would be to move the actual simulation online, pre-class. While Harvard, like most U.S. universities, has an institutional license with Qualtrics for web surveys, I was skeptical that Qualtrics was up to the task. With its new web-survey support and other new features we’d added in recent months, however, I was confident that SurveyCTO could do the job. And, in fact, it only took me a few hours to put it all together.

There were aspects of the simulation that made it like a normal web survey: we wanted users to follow a simple link, work through the simulation, and then submit their responses, and we wanted to be able to easily download and analyze the resulting data. However, we had other requirements that pushed beyond your standard web survey:

While this simulation is meant to take place online, these requirements more closely resemble the kinds of advanced features that many of our SurveyCTO users require in their offline, Android-based field surveys. Luckily, we built SurveyCTO’s online web support to include essentially everything that our Android app supports.

You can see – and try! – an abridged version of the resulting simulation here:

The simulation is being piloted now, with an executive education cohort at the Kennedy School. Then, shortly thereafter, it will be used for roughly 250 Masters in Public Policy students. My guess is that the simulation will work even better online than it did in-class, but I’ll have to wait and see.

If you’re a SurveyCTO or ODK user, you might be interested to see how this simulation was actually built. If so, read on!

An abridged version of the simulation’s form definition is attached here, in Microsoft Excel format. I recommend opening it and then keeping it open as you read through the following discussion. I make use of some advanced features and do a few tricky things, so you may learn a thing or two even if you’re an expert SurveyCTO user (and even if you’re not thinking about using SurveyCTO for a simulation).

The first thing you’ll notice is that there are a bunch of long note fields, including funny-looking codes like <i> and </i>. The idea is that users of the simulation will always run the simulation on the web, using their web browsers. So we’re expecting the screen to be large and we can use HTML codes for formatting text. We would include much less text – and none of the HTML formatting – if we expected users to use this form on Android devices.

At the very top of the form, there are a few calculate fields. One tracks the total duration of time the user spends filling out the form, and two pull random draws that will be used later in the form (the draws are from a uniform distribution [0, 1]).

Below those calculate fields, there is an introductory note. This note field uses the intro appearance to override the text on the form’s opening screen (the one that typically gives the user generic instructions about how to begin).

Below that is a group with the field-list appearance, to ask a couple of questions on a single screen (in this case, the user’s first and last name).

Then, there is a lengthy screen with the full background reading for the simulation. Here, that background is actually abridged; the real HKS narrative is quite long and detailed, presenting the information in a more realistic form.

After that background is a calculate_here field that records how much time has been spent in the form so far. The idea here is to capture how much time the user spends reading over the background materials before moving on to make a decision.

Next comes the first decision point. As mentioned earlier, there are a few key things that were important to us in this simulation:

Obviously, I made heavy use of calculate_here fields. This is very unusual. Normal calculate fields automatically re-calculate whenever something on which they depend (like a response) changes. That’s almost always what you want. But calculate_here fields only calculate when you pass that exact point in the survey form. And when you surround your calculation expression with the once() function, it will only calculate once, rather than re-calculating whenever you pass that point. For keeping track of how long it took to get to a certain point in the survey, or for recording somebody’s first answer to a question, calculate_here with the once() function is exactly what we want.

Returning to the simulation form, the next thing that happens is the first random draw is used to determine the stage-one outcome (whether the outbreak looks mild or severe after two weeks). Once that determination has been made, one of four notes is shown, to summarize the situation (there are two possible decisions and two possible stage-one outcomes, so four possible scenarios).

Next, the user is asked to make their stage-two decision, based on the new information from stage one. Again, there is great care in the relevance conditions so that future results aren’t visible to the user, there is no way to go back and change one’s answer once it has been confirmed, and the time spent up through decision two is recorded for future analysis.

At the end, there is then a final outcome reported to the student. Because we were afraid that students might see this final outcome and close their browsers without submitting their responses, we decided to put the final outcome only on the final thank-you screen, after they had submitted their responses. There were 16 possible outcomes depending on the path they took through the simulation, and so there were 16 possible summary notes at the end. Each had a relevance condition so that it would only appear for the appropriate students, and each had the thankyou appearance so that it would only appear after their responses were submitted. 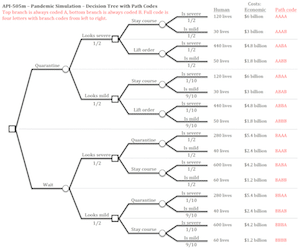 When we discuss this simulation in class, we use a decision tree to illustrate the key aspects of the problem, summarize probabilities and outcomes, and think about the optimal decision-making process. Dan wanted to be able to quickly and easily take the raw data from the online simulation and translate that into how many (and which) students ended up making which decisions and arriving at which outcomes. He basically wanted an easy way to map from the data into the decision tree. So, we coded every branch of the decision tree as A for the top branch and B for the bottom branch, and then summarized all branches together by concatenating the letters into a single path (AAAA if all top branches, ABAB for top then bottom then top then bottom, etc.).

This method of coding gave us a nice “path code” for every student. When tabulated in alphabetical order, it would take only a minute to transcribe results from the data onto a decision tree that could be, for example, shown on an overhead during the in-class discussion. In this way, using calculate fields to calculate values in the form itself, we can often assemble data in a way that’s convenient for later monitoring or analysis.

The Excel form definition is a bit intimidating, for a few reasons. One, there is a lot of grouping of fields, but that grouping is a bit hard to visualize in Excel: each group is surrounded by begin group and end group rows, but then groups are nested within each other. Two, the relevance conditions that control what displays when are influenced by these groups, so for example a field inside the have_stage1_decision group only displays when we already have a stage-one decision. And while I tried to name the groups in a suggestive way, this method by which fields inherit their groups’ relevance conditions is not easy to follow in Excel.

So I have a confession to make: when working on this simulation, I cheated and used our new drag-and-drop form design tool. And wow, what a difference! We’ll be blogging about that soon, but until then just an example of how things look in the form designer:

Our world is changing. Introducing the Safe People + Data Initiative

Learning about people of African origin in Belgium