Innovations for Poverty Action (IPA), a research and policy non-profit, has been studying how market interventions can improve access to sanitation around the world. To learn more about the latest developments in West Africa and how IPA is using SurveyCTO in the field, we connected with Shoshana Griffith, who manages multiple IPA urban sanitation projects in the region.

What urban sanitation projects are you working on in West Africa?

Can you tell us more about this sector and why it’s important?

Most residents in urban areas around the developing world depend on on-site sanitation systems, meaning waste is stored on private household compounds, in latrine pits or septic tanks. In the cities where we work, the sewerage connection rate is 25% or less, so these households rely on private desludging services to empty their pits periodically. The most sanitary method for this is mechanized desludging using a pumping truck, which leaves the compound cleanest and allows the sludge to be disposed off-site.*

“The impact of inadequate sanitation extends from fecal-born disease among children to environmental pollution in communities.”

In some places (Senegal and Burkina Faso) it is still common to have pits emptied manually, by either a family member or a manual desludger, and the sludge is not safely disposed of – it’s usually dumped somewhere in the neighborhood or in open sewers. Even in more developed sanitation markets (Ghana), where manual desludging is rare, toilets can go for many days without being used after they’ve overflowed because of limited access to desludging services. The impact of inadequate sanitation extends from fecal-born disease among children to environmental pollution in communities. 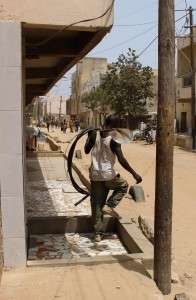 There are several issues in sanitation markets which together lead to the under-provision of mechanized desludging:

Market power: A small number of providers, with powerful trade associations and high barriers to entry, have allowed desludgers to keep prices high and quantities low.

Externalities: Sanitation decisions have consequences for the rest of the neighborhood, in disease prevalence and environmental cleanliness. In markets with high externalities, the quantity of improved services provided is below the optimal level.

Low willingness to pay and high prices: A mechanized desludging in Dakar costs $50-$60, or about 5 days’ wages, compared to a manual desludging at $25-30 (or free if you do it yourself).

Our projects test a number of mechanisms to alleviate these market failures: encouraging competition among suppliers, leveling the playing field for negotiations, using social pressure to discourage manual desludging, providing subscription plans to help households save for desludging, and employing alternative pricing models such as targeted subsidies.

“…interventions that lower prices – like the call center auctions – can have a large impact on take-up of improved sanitation.”

Where are you in the project now?

The Dakar team finished in the field in July 2015, and the Senegalese Ministry of Sanitation has scaled up and taken over management of our main intervention, a call center that conducts live SMS auctions for mechanized desludging. We have some early results and are working on the papers now. We tested subscription plans which offered households the opportunity to pay for desludging services over time; this had a small positive impact. 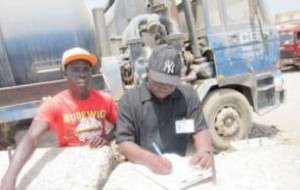 We also found that the demand for mechanized desludging is very elastic – meaning households are very responsive to even small price changes. This means interventions that lower prices – like the call center auctions – can have a large impact on take-up of improved sanitation.

We will conduct the endline surveys for Burkina Faso and Ghana later this fall, using SurveyCTO, of course!

What are some of the innovative ways you’re using SurveyCTO?

We have used SurveyCTO for all of our major household surveys since 2013. Our Senegal project was one of the early adopters, and they used the preload functionality during our baseline survey before the Datasets feature was developed. 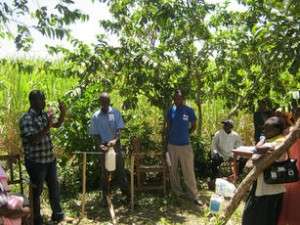 One of our interventions was to test the potential of social pressure to discourage manual desludging. The way we did this was to split up survey clusters of 10 households into two groups and share information on desludging decisions with half of the neighbors. The first five households were surveyed in the morning. Over lunch time, the field office downloaded their data, ran some quick formatting and analysis, and preloaded it to our server. The survey teams then updated the survey form, now with the preloaded data, on their PDAs using mobile Internet. During the afternoon, the survey teams went to the second five households in the cluster and told them how many of their neighbors had signed up for our subscription service (basically committing to use mechanized desludging).

“SurveyCTO saved us a lot of time and cost by integrating our interventions dynamically into the survey.”

Before SurveyCTO, you would have had to visit the cluster in two stages, and that would be very costly. Even the way we did it was difficult so we only ran the intervention in a subset of clusters. The newer features of SurveyCTO would allow you to do something like this, but without so many manual steps in between. It would be much faster. 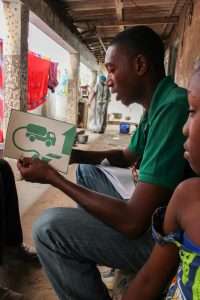 In our Burkina Faso project we are testing out targeted pricing for mechanized desludgings. Our principal investigators developed a price model that predicts the subsidy size, with price bins between $20 and $40, necessary to convince a household to use mechanical services for their next desludging based on a few basic household characteristics. During our baseline survey, we programmed the model into our SurveyCTO form using calculation functions so that the survey would dynamically calculate the household’s price from the model. At the end of the survey, we told the participants the price they could get through our program, and asked them to leave a deposit if they wanted to reserve a desludging at that price. About half of participants agreed to our prices, and they will have a year to redeem the service through our call center.

This type of programming could probably have been done with basic ODK, but since it’s complex, we relied a lot on SurveyCTO help and training resources to make it happen. SurveyCTO has additional calculation functions that are not available with ODK, so I’m not even sure if it could have been done at all. In any case, SurveyCTO saved us a lot of time and cost by integrating our interventions dynamically into the survey.

*As a separate issue outside the scope of these projects, many cities still do not have proper facilities for treating and safely disposing of fecal sludge. In Accra, most sludge is dumped into a lagoon that empties into the ocean. Ouagadougou’s first official dumping site was only opened in 2014. For many years in Dakar, the wastewater from the sewer system was not safely treated, but the city has recently expanded the capacity of its treatment centers, including privatizing them in late 2014. Our researchers are also evaluating the impact of the privatization.

What’s the impact of organized crime on government efforts to fight COVID-19 in Colombia?